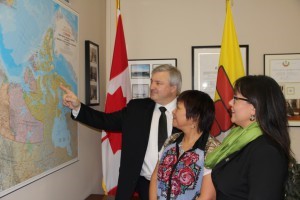 OTTAWA, ONTARIO (December 3rd, 2012) – The Honourable Leona Aglukkaq, MP for Nunavut, Minister of Health, Minister of the Canadian Northern Economic Development Agency and Minister for the Arctic Council, today commented on the federal approval of the Baffinland Mary River Project, based on the recommendation of the Nunavut Impact Review Board. “Canada’s North is home to world-class natural resources representing a tremendous economic opportunity,” said Minister Aglukkaq. “The Mary River iron ore project has undergone a thorough review to ensure that  it will be developed in a sustainable manner, allowing generations of Canadians to benefit from the jobs and economic growth it will generate.” “Our Government recognizes the significant economic opportunities that mining development brings to Nunavut,” she added. “CanNor’s Northern Projects Management Office has played a fundamental role in bringing timeliness and effectiveness to the regulatory process for the Mary River iron ore project, which has huge potential to create thousands of jobs and bring long-term growth to Nunavut.” The Mary River project is owned and operated by Baffinland Iron Mines Corporation which is jointly owned by ArcelorMittal and Iron Ore Holdings L.P. The project is situated on north Baffin Island, 160 kilometres south of Pond Inlet, Nunavut. “Minister Duncan’s approval is an important and significant milestone in advancing the Mary River Project”, said Okalik Eegeesiak, President of the Qikiqtani Inuit Association.  “The NIRB process was the first step in collaboration with Inuit and industry to ensure the plans for the project were thoroughly reviewed”, Eegeesiak added.  “The QIA looks forward to working with all parties to bring the socio-economic benefits to Inuit and our communities.” The project now moves into the project certificate phase, led by the Nunavut Impact Review Board (NIRB). The project proposal involves conventional open-pit mining of iron ore at a rate of 18 million tonnes per year over a projected 21-year lifespan, and an initial investment of more than $4 billion for the construction of a road, a railway, a deep-water port and mine site infrastructure. Project employment is estimated to create thousands of jobs during the construction and operation phase. The project was approved by the Minister of Aboriginal Affairs, with concurrence from  responsible Ministers for this project, including the Ministers of Environment, Fisheries and Oceans, Natural Resources and Transport Canada.