FOR IMMEDIATE RELEASE: On September 8, 2014, Baffinland began mining and transporting ore to the port site where construction of its Milne Port continues, on schedule, with the intent of shipping first product during the open water season of 2015.  Baffinland’s Mary River Project reached this milestone without a single Lost Time Injury during the last three years. 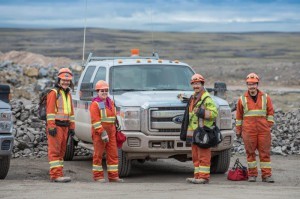 The Mary River Project is located on northern Baffin Island, in the Territory of Nunavut in the Canadian Arctic. Due to the quality of the ore, no processing is required before shipping it to market, reducing overall impact to the environment and keeping production costs low.

An important milestone was reached on September 8, 2014 when Baffinland transported its first load of iron ore to its port site at Milne Inlet. On September 19 there was another reason to celebrate as Baffinland reached a 3 year anniversary without a single Lost Time Injury (LTI).

“This is excellent news,” said Tom Paddon, Baffinland President and CEO. “I am extremely pleased to say that we are now truly a mining company; we have drilled, blasted, crushed and transported final iron ore product to the port at Milne and we have done this with a record of no Lost Time Injuries over a 3 year period; a significant achievement particularly when you consider that we are operating in the high Arctic. This is an important moment in the north. After more than fifty years of talk about developing Mary River, Baffinland has succeeded in this accomplishment. While we still have important work to do that will ensure the efficient transport of product to market, we can rightfully take pride in what our Baffinland team has safely undertaken thus far.”

Mining operations at Mary River are run on a continuous basis, 12 months of the year. Iron ore is stockpiled at Milne Port pending shipment, which will commence in the open water season of 2015