Baffinland won this year’s Murray Pyke Award at the 2014 Nunavut Mining Symposium’s Gala Dinner in Iqaluit, Nunavut, Canada. The annual award, this year accepted by Baffinland President and CEO Tom Paddon, recognizes the contribution of a mining, exploration, or related company to the economic and social development of a community, region or the territory of Nunavut in general. 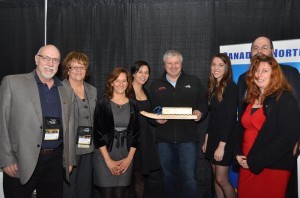 As well as manning a booth at the trade show on day 2, an event which included a well-attended free access afternoon for the general public, a few members of the Baffinland team gave presentations at the symposium.

“The Mary River Project has the ability to greatly contribute to the development of infrastructure, skills training, and employment and business opportunities for the people of Nunavut,” said Tom. “The success of the project, however, relies on the cooperation of all stakeholders, working together to achieve mutual benefits from the ground up.”

Baffinland’s year
Upon presenting the award, Bernie MacIsaac, co-chair of the Nunavut Mining Symposium Society said: “Baffinland has been a solid player on Nunavut’s mining scene for many years. The recent signing of the IIBA agreement with QIA certainly shows they have made the grade and we are looking forward to hearing more good news out of them.” Bernie also told the audience on the night of the gala evening that the awards committee, when reviewing the nominations received in this category, had identified one resounding theme; that “This is Baffinland’s year.”

Murray William Pyke was a founder, executive and director of Comaplex Resources and Bonterra Energy, both of Calgary. A prominent figure in minerals and petroleum exploration in Canada, Murray spent many summers in the bush mapping the Canadian Precambrian Shield in northern Saskatchewan, the Northwest Territories and Nunavut. This work reflected his love of the outdoors, satisfied his scientific intellect and nurtured a deep respect for the indigenous peoples of Canada whom he worked and lived with during those years.